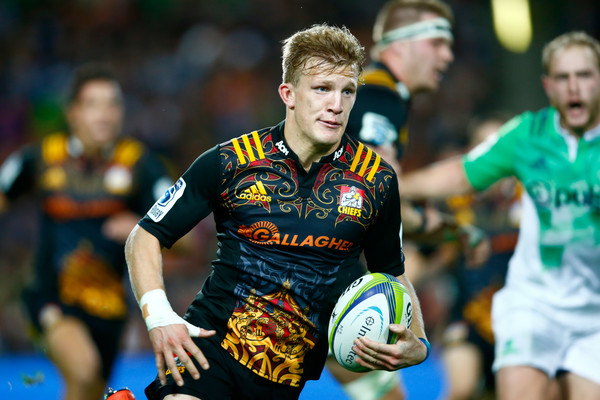 Super Rugby pre-season is now in session, and the Chiefs continues to be a great destination for blooding expressive young talent keen to get time on the field.

The Chiefs showed great signs of improvement during 2016’s Super Rugby campaign. It wasn’t as if Dave Rennie’s men were particularly bad the season prior, but some young talent really came into itself throughout 2016, and they helped the Chiefs to much success.

Despite having some rich experience in the form of seasoned veterans, the Chiefs have become the best club in New Zealand at developing young talent into International quality players.

But, in playoffs rugby, the same young talent was outclassed by the brilliance, and experience, of Beauden Barrett during the semi final.

However, throughout the season, you could just sit back and watch some of these players grow, both in form on the field, and confidence surrounding all areas of their role as a professional rugby player. Look no further than Damian McKenzie and Anton Lienert-Brown. Both impressed and earned their All Black selections, but for McKenzie, it all seemed to take a little longer.

A lot of people felt that McKenzie was ready for great things in his debut season of Super Rugby two years ago, but his performance throughout was average, and he was tried out in different positions. In 2016, Rennie decided to keep McKenzie at fullback permanently, and not only did he perform well, but his fitness was such that he never missed a game. Lienert-Brown on the other hand, didn’t get regular chances until this year, and he took far less time to settle in. But, at the same time as settling in, Lienert-Brown was impressing the All Black selectors, whom of which didn’t hesitate to select him.

Off the field, the maturity of these two men in particular managed to catch the eye, and often it was ever so surprising. In his first full season in the Chiefs environment, McKenzie was chatty and approachable to the media, but in his second year, the 21-year old went into his shell and focused on his game much more. It wasn’t a case of McKenzie not liking the media, but it was a distraction nonetheless.

McKenzie knew that the All Blacks were watching, and he wanted to ensure he was ready when the phone call came. The Real Michael Pulman understands that McKenzie, like a lot of youngsters in the Chiefs environment, was spending a lot of time with sports psychologist David Gailbraith, working intently on the area of self-development.

All of the above, was simply an observation, and I think it’s fair to say that the truly great sportsman will always be looking to make slight changes to how they carry themselves as time goes on. Those two men, in particular, are going to take big leadership roles throughout 2017, and perhaps even beyond that.

Experienced coach Colin Cooper will take over the Chiefs after Rennie’s departure at the end of the 2017 season. Cooper, the current coach of the Maori All Blacks and Taranaki, will be announced as Rennie’s successor prior to Christmas, according to Liam Napier at Fairfax Media. Cooper coached the Hurricanes from 2003 till 2011, and has since guided Taranaki to the 2014 provincial title and also helped the team claim the famous Ranfurly Shield.