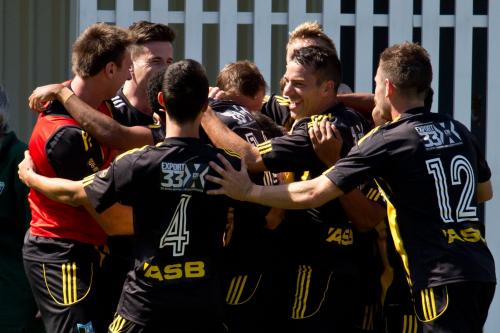 WaiBOP United came close to causing a big upset in the opening round of the ABS Premiership, but Team Wellington showed that in the game of football, it is never over until the final siren sounds.

Saul Halpin struck the winner for Team Wellington with just over a minute left in regular time, when just moments earlier it looked like his side was about to notch a loss to start the season.

When Mark Jones scored for WaiBOP United to make the score 2-1 after a tight second half, victory looked to have been secured for the home side.

But two late goals for Wellington, including an amazing move from the kick off that was finished by Ben Harris, WaiBOP United’s hopes were quickly dashed.

Wellington scored twice in the last ten minutes to comeback from behind and win 3-2.

It took just 15 minutes for the first goal.

WaiBOP United centre-half Adam Luque headed the ball past Wellington goalkeeper Scott Basalaj and found the back of the net after a brilliantly delivered corner by Marc Evans to give his side the early lead.

Saul Halpin had a chance to immediately answer back for Wellington but struck the ball wide of the goal from inside the box.

The rain began to fall, and it appeared to aid Wellington.

Andy Bevan levelled the scores in the 31st minute, scoring a relatively easy goal in a one on one situation with WaiBOP goalkeeper Zac Speedy.

Bevan was flirting with being offside but wasn’t called by the referee.

The score remained 1-1 at halftime but both sides were creating good opportunities to score goals in heavy rain.

An ambitious attempt from Wade Molony didn’t change the score line as the second half began with heavy rain still falling.

Moments later, WaiBOP United was given the chance to take the lead with a brilliantly worked ground cross into the box, but the wet turf saw the open attacker not able to connect with the ball and Wellington were able to clear their lines.

A questionable call from the referee cost WaiBOP United again despite a dubious tackle on Marc Evans in the goal box, leaving the home crowd furious.

A head clash between Finn Cochran and Any Bevan halted proceedings temporarily.

WaiBOP captain Federico Marquez was brought down in the box, but no penalty was awarded despite the physical challenge. Marquez injured his right leg but remained on the field, running it off gingerly.

As time ticked away, WaiBOP United were causing Wellington problems on defense, regularly getting into the attacking zone but the attack was just not getting enough space to strike at the goalkeeper.

Another questionable decision by the officiating team angered the home crowd further when they failed to award an obvious corner to WaiBOP United with little time remaining.

The persistence and patients payed off for WaiBOP United when Marquez floated the ball out to Mark Jones who beat the lone defender and struck the ball into goal, giving WaiBOP United a 2-1 lead late in the match.

The party was short lived however, Wellington charged downfield from the kick off and Ben Harris scored, drawing the scores even for Wellington 2-2.

Ryan Tinsley tried desperately to hit the winner for WaiBOP United, stretching the Wellington goalkeeper but pushing the ball past the posts.

Five minutes remained; but Wellington pulled the winner out of the bag thanks to midfielder Saul Halpin, in the 89th minute, leaving the visitors just the injury time to hold on for victory.

Wellington held on for the win, the final score 3-2, and in the process, securing three points in the ASB Premiership.