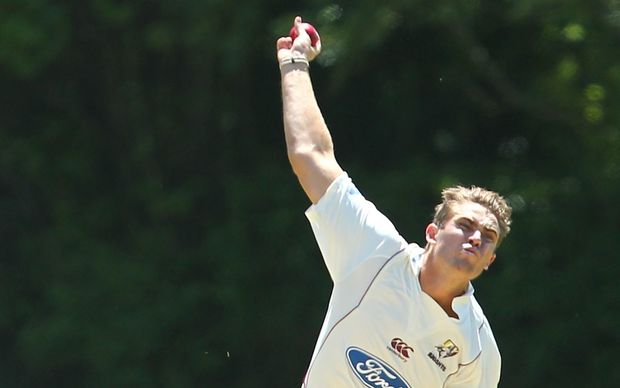 Luke Ronchi batted Wellington out of early trouble as Blackcap Tim Southee took five wickets for Northern on the opening day of the 2015/16 domestic cricket summer.

Northern won the toss and elected to bowl first; the decision paying off with five quick wickets, three to Tim Southee including a snare in his opening over.

Ronchi came to the crease when Wellington were in all sorts of trouble, but with some aggressive shot play against average bowling from Scott Kuggeleijn, Ronchi batted his side back into contention and scored another first class century.

Southee took five wickets for Northern in an impressive bowling performance and Wellington was dismissed for 267.

Northern opener and captain Daniel Flynn equalled honours at the end of day one with a solid knock of 56 unbeaten at stumps.

Luke Woodcock dug in for the Firebirds and slowly began to show signs of controlled aggression at the crease but was eventually dismissed by Scott Kuggeleijn for a defiant knock of 27.

Jimmy Baker sent Pollard back to the pavilion as Northern continued their dominant start to the match.

Tom Blundell scored 34 quick runs to form a partnership with Luke Ronchi and saw Wellington to lunch at 84/5.

Blundell continued to find the boundaries and pushed the partnership with Ronchi past 50, putting Northern under pressure to keep the wickets flowing as the afternoon sun began to ease the difficulty of batting after an overcast morning.

Ronchi began to free the arms, finding boundaries on regular occasion and reached 50 off just 53 balls. Wellington raced past 150, and Blundell brought up his half century with a brilliant straight drive boundary.

Southee took a relieving wicket for Northern as Blundell tried once to many times to use the hook shot and scooped the ball straight to Kuggeleijn in the field as Wellington lost their sixth wicket.

Jeetan Patel joined Ronchi at the crease and built an innings quickly. Ronchi continued to score quick runs but Northern weren’t doing themselves any favours with some ordinary bowling lines.

Wellington dominated the afternoon session; scoring 133 runs and Ronchi went into the tea break just three short of a century.

Patel was dismissed by Baker, but Ronchi brought up his century in fine style with an aggressive hook shot moments later, proving his worth as one of the best wicketkeeper batsmen in first class cricket.

McEwen smashed Baker to the boundary three times in a single over to take Wellington past the 250 mark.

Southee was finally able to dismiss Ronchi, but the crowd gave the Wellington batsmen a standing ovation for a brilliant knock of 115 that swayed his side into a commanding position. With the dismissal, Southee picked up his fourth wicket of the day for Northern.

Joe Carter was lucky not to be dismissed for a duck, edging to the slips, but the ball escaped the hands of the fielder and rolled to the boundary. Wellington snared their first wicket when Carter was dismissed for 13 in the eighth over after playing all around the ball and being clean bowled by Hutchinson.

Northern were 30/1 when Kane Williamson strode to the crease.

Daniel Flynn batted his way to 20, hitting boundaries at regular intervals. Williamson found the boundary with a powerful hook shot. Northern brought up 50 runs when Flynn stuck the ball off his hips for a boundary.

Flynn raced past 50 and would go on to hit seven boundaries before stumps, Kane Williamson played a good support role to help Northern close out day one on 94/1

Stories of note from day one: