With Brendon McCullum likely to sit out the final ODI against Sri Lanka, Tom Latham is set to get his shot opening the batting alongside Martin Guptill. 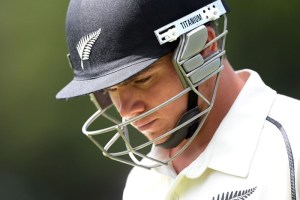 In the test arena, Latham did well opening the batting for the Blackcaps but is yet to prove that he has the stocks to do the same in the shorter form of the game.

With all the conjecture surrounding Martin Guptill at the moment, Latham is going to need to find his runs a lot quicker than he has so far while batting further down the order in this series and his scores haven’t been all that much to write home about.

Latham has mostly batted around the singles with a few boundaries here and there, but a role at the top of the order alongside the typically slow to start Martin Guptill will dictate that Latham needs to come out of the blocks aggressive.

What the Blackcaps don’t need at the top of the order is two batsmen who take 20 balls to find the boundary.

McCullum was always going to be rested at some point during this series.

From the moment Latham was selected in the World Cup squad the possibility of an experiment at the top of the order was always high.

But with just three games to go until the tournament begins, the Blackcaps must field their A side, the side that they intend to go into the World Cup with no later than the second game of the Pakistan series in Napier next week.

Daniel Vettori also hinted yesterday that the Blackcaps will go into Wellington with two spinners in the starting lineup, with Vettori likely to bat at No.7.