Australian opening batsmen Phil Hughes is fighting for his life in hospital this afternoon. 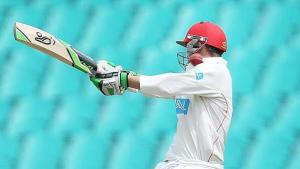 The Australian and SA Redbacks batsmen is in critical condition after being hit in the head by a cricket ball as he attempted to pull away a short delivery bowled by NSW bowler Sean Abbott during a domestic four day cricket match at the SCG today.

Attempting to play the pool shot, Hughes was struck under his left ear by the ball.

Hughes stood around after the head knock but then collapsed face first onto the pitch moments later.

Medical staff were immediately on the scene, and Hughes was taken to hospital shortly after as attempts to wake up the batsmen came up short at the ground.

Australian cricket captain Michael Clarke was seen arriving shortly after, leaping out of his car and sprinting into the hospital.

More on this will develop as news comes in obviously but word out of Australia is not good at the moment.

But for now, let it be said that this was clearly just a tragic accident and it is great to see that Sean Abbott has received a huge outpouring of public support on social media this afternoon, as has Phil Hughes and his family.