The SkyCity Northern Knights are sitting pretty at the top of the Georgie Pie Super Smash table as the competition rolls forward around the country. 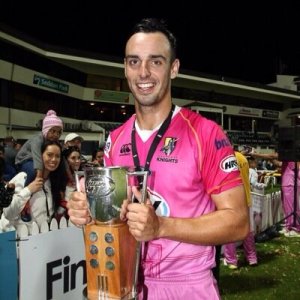 After the first couple of weekends in Hamilton, the Knights have kept their position as the best team in the competition with wins against Canterbury and Auckland, and will look to keep the momentum with a victory over the Volts on Sunday afternoon in Wellington.

A victory against the Volts on Sunday would make a finals appearance that little bit more possible.

The Knights have another 3 games to play in the Georgie Pie Super Smash, Sunday against the Volts before a matchup in Napier against the Central Stags on November 29th and then the Auckland Aces the next day.

Both the Kings and Aces who sit second and third on the table respectively remain the biggest points of interest for the Knights.

The Knights have the advantage of a game less to play in the Georgie Pie Super Smash, while both the Kings and the Aces are set to play another 4 games before the finals weekend in Hamilton.

With three games remaining in their season, the Wellington Firebirds now need to win all their games to be a viable contender for the finals.

The chances of the Central Stags and Otago Volts are all but dashed.

The Knights will be without the services of Daniel Vettori and Anton Devcich this weekend however as both players are away with New Zealand A.