Rockstar have confirmed that the upcoming PS4 and Xbox One versions of critically acclaimed GTA V will feature a First Person (FPS) experience. 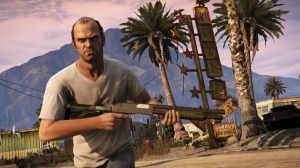 The rumor of FPS has been around since the newer version of GTA V was revealed.

From a FPS experience, players will be able to drive, shoot, walk around, and fly all from the new camera angle that Rockstar say they have wanted to put into a GTA title for a long time.

Footage if the new mode can be seen below:

The updated version of GTA V will also feature classic cars from the franchise, new missions, and all GTA Online data from PS3 and Xbox 360 versions will be carried over through the Rockstar games club.

GTA V on PS4 and Xbox One will release on November 18th.