As expected, talk of Jesse Ryder has been growing and growing in the media over the last few weeks. 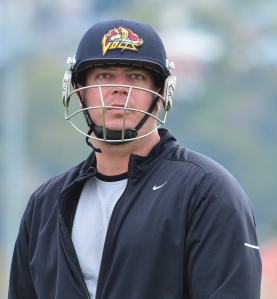 Blackcaps captain Brendon McCullum and Blackcaps coach Mike Hesson both confirmed to Radio Sport that they’d talked to Ryder, and that the door certainly wasn’t closed on an international return.

Ryder last played for the Blackcaps at the beginning of this year during India’s tour to these shores.

His place in the Blackcaps is (as expected) one of the key debates both on talkback and the general cricket loving public at the early stage of this cricket season.

Some say a Jesse Ryder clean of alcohol is a must have selection, others say the controversial batsmen has no place in the side anymore, regardless of if the issues are put to bed or not.

But the fact is this.

Jesse Ryder scored 136 off just 57 balls against Ireland today. That strike rate is absolutely staggering, better than it has ever been, and following on from his success over in the UK this winter, absolutely no critic can possibly question the amazing form that Ryder is in at the moment with the bat.

That innings featured 18 boundaries and 8 sixes, with his first 50 runs coming off 16 balls.

Tony Veitch stated tonight on his Facebook page that Jesse Ryder had closed the door on possible Blackcaps selection after making himself unavailable for next weeks North vs South Twenty20 match in Hamilton.

Neither NZ Cricket nor Ryder himself has confirmed that as yet and one can’t help but ask the question of why the facts as we know them cannot just be written about, without the unfounded stuff.

With the speculation only set to continue, it remains unclear as to what Ryder actually wants regarding his future with the Blackcaps.

But again, this blog has written countless times during the year that one of the biggest things this Blackcaps side needs (amongst everything else) is balance, and whatever off field antics that go on do and will have an impact on the World Cup campaign.

Jesse Ryder is showing balance and absolute amazing skill with his current form.

That too, cannot be discounted.