It is hard to say that Jesse Ryder should, or shouldn’t be in the Blackcaps squad for next years Cricket World Cup. 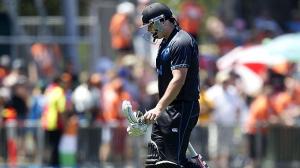 Word has it that New Zealand Cricket has recently been in contact with Ryder via email. The topical cricketer has been on fire in the English County season during the winter, and rumor has it that NZC are sending out some feelers to enquire if a Ryder return to the Blackcaps is possible.

A lot of callers on talkback radio have said they would like to see Ryder in the side for the World Cup.

But the problem is this.

The whole Jesse Ryder saga, wether or not he should be in the side, is not just a question of form anymore. If you were to select Ryder based on form, then he would be one of the first picks for the 2015 World Cup. But since the antics of 2008, validating Ryder’s place in the Blackcaps has never been just about his form.

And frankly, why should it be? Look at the record of off field antics. That sort of thing impacts a team. It cannot be looked past.

It feels like the Blackcaps as a unit have moved on from Ryder. The summer season of 2013/2014 was arguably one of the most successful in recent memory. That was with the Ryder and Bracewell drinking issue.

When you look at this Blackcaps side you see a certain balance to it.

Bringing Ryder in for the World Cup would be an interesting call. No doubt it would be popular with many in the NZ public, but perhaps not inside the Blackcaps camp itself. It seems that many of the players don’t want Ryder back.

It is very hard to leave a player out of the team who can smash boundaries almost at will, like Ryder can, and if we are talking about putting a team together that has the best players and the best chance to win a Cricket World Cup, then it is certainly very hard to look past Ryder given the form that he is in at the moment.

But what if Ryder gets selected, doesn’t play well, and gets involved in yet another off field incident?