The main event at SummerSlam was barely a wrestling match, and it’s impact was quick and sizable. 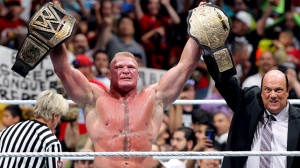 Brock Lesnar is the new WWE World Heavyweight Champion, and fans of John Cena will still be getting used to the reality of what they saw in the ring during the so called “biggest fight of the summer”.

After losing the title in such a drastic and brutal fashion, where do WWE take John Cena from here?

Lesnar delivered sixteen, yes sixteen German Suplexes to Cena during the match, and the second F5 was when the victory count came.

Cheers with ruffled laughter was the reaction of the crowd inside the Staples Center. Most predicted that Lesnar would win, but not many saw the match going the way it did, and certainly everybody was shocked at just how one sided the creative team at WWE decided to script the match.

Fans have never seen John Cena, arguably WWE’s top man, be dominated in such a fashion.

But with Lesnar now as the champ, the question remains over how WWE will book him going forward. Will Lesnar defend the title at the next PPV? And who out of the current roster can you say is legitimate enough to take the title off Lesnar when the time comes?