The Chiefs have, perhaps unsurprisingly, continued their losing ways tonight in New Plymouth after being in a position to snatch a win from a much better Waratahs side. 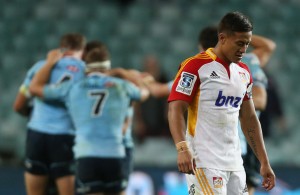 The Waratahs dominated just about every stat in the first half, holding much of possession and playing much of the game deep in Chiefs territory.

With the score locked at 3-3 after a penalty each way, a stunning break from Adam Ashley Cooper set up an easy try in the corner for Isreal Folau.

Handling errors weren’t just the problem for the Chiefs, but also accuracy, the returning Aaron Cruden failing to kick the ball into touch on two penalties. As has become the norm for the Chiefs in recent weeks, much of the first half was a comedy of handling errors, knock on’s and miss passes, turnovers in the wrong area of the field.

The defense was just as potent for the Waratahs as the attack, giving no opportunities for Cruden to feed any of the backs into space, causing a lot of hesitancy for the Chiefs with the ball in hand.

The Waratahs went into the halftime break up 13 – 3, with a good strong gasp on the game.

Couldn't agree with the coach more. Chiefs are lucky to not be losing by many more points at the moment. #SuperRugby #CHIvWAR

The Chiefs began the second 40 minutes with a lot more discipline than the first half, attacking more fluently and making line breaks thanks largely to Dwayne Sweeney.

A successful penalty gave the Waratahs more of an edge, but it was against the grain, with the Chiefs looking more and more dangerous as they threw caution to the wind in an attempt to get back into the match. Bundee Aki came off the bench and immediately turned positive intent into points, scoring a quick try after Cruden kicked the ball through into the in goal. The try was awarded, but replays clearly showed Aki wasn’t in control of the ball.

But given the state of the game, the Chiefs needed something to go their way, and they certainly took what looked like a questionable try at best.

The Chiefs looked renewed, and suddenly Aki scored again, chasing down another through ball, suddenly propelling the Chiefs to a 17-16 lead with just over 10 minutes to play.

This is where it all went down hill for the Chiefs though, ending the game with arguably the worst 10 minutes of rugby all year.

Yet more lack of discipline handed the Waratahs a penalty, to which Foley kicked successfully, putting the Waratahs quickly back into the lead, if only a two point lead. The Chiefs had time to score again, but the errors returned, and an awful defensive set allowed Waratahs captain Dave Dennis to storm past a lone defender, giving him a clear run to the line, scoring in the corner and putting the game beyond all doubt. The kicking was outstanding all night long from the Waratahs, all penalties and conversions successful, and when Foley scored on the fulltime siren, the score line had quickly become a blowout at 33 – 17.

The Waratahs winning in New Plymouth, and by a massive margin in the end.

Had a chance to win, but this lacklustre showing wasn't worthy of a win anyway. Disappointing, yet not a surprise. #SuperRugby #CHIvWAR

Cruden’s return to the starting role was very mixed, he didn’t have the best night with the boot, but the Chiefs had themselves in a position to steal the match late but couldn’t finish. Arguably, the Chiefs played their worst first half of the season.

Nothing can be taken away from the Waratahs, they were super in all areas of the game, Ashley Cooper proving why he is such a world-class player, and Foley being incredible with the kicking boots. The Waratahs are the class side in the Australian conference, and depending on how they go once Super Rugby returns from the international break, they could be the real deal and be a real handful come play offs time.

Is the season looking over for the Chiefs? Well, the answer is no and the international break comes at the perfect time for the defending champions.

There is a lot of work to be done though.