The WWE writers ended the streak last night. For a scripted sport, it sure does hurt sometimes. But oddly enough, this hurt is a good one, because just look at what Undertaker did for the business ok.

Less than 24 hours removed from WrestleMania, it would be a fair guess to assume there is a lot of emotion amongst wrestling fans around the world today. I am still shocked, mainly over the fact that it actually happened. Wrestling never makes me cry, simply because it is fake, it isn’t real… but something happened at Mania this year which had me tearing up FOR REAL. 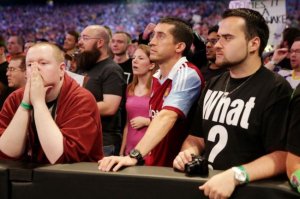 Yes, what has always been a constant in wrestling is now over.

It is a funny thing about that word constant ay, we feel comfortable in it, we know what it is. When a constant is broken, it is upsetting.

Mark Calloway, aka the Undertaker, hasn’t just been the top man in WWE for the last 21 years, he has been the voice of knowledge to all the talent who have come through the ranks and has been the absolute benchmark of the sport. You don’t get higher than him. Jim Ross has been heard saying that for a wrestler to perform against Undertaker at Mania makes you a made man in the business.

Brock Lesnar, for whatever reason why WWE scripted it so, ended the greatest and most loved legacy in professional wrestling.

I don’t think there was one person inside the 75,000 sold out Superdome who didn’t have the same reaction last night.

Brock Lesnar’s WrestleMania moment may well be the greatest moment of all time in the fake sport of professional wrestling.